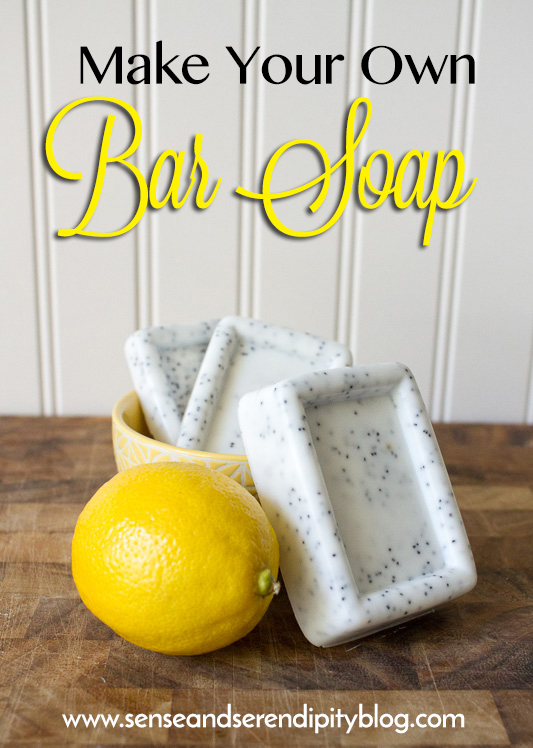 I love handmade bar soap. They are so luxurious and smell divine. And they’re so much better for our skin than the mass produced soaps at the store. But, they can be really expensive and sometimes I just don’t want to pay $7 for a bar of soap. What’s a girl to do? If you know me at all, you already know the answer to this question. That’s right, friends. I decided to make my own bar soap. And it was one of the easiest DIY projects I’ve ever done!

Granted, I cheated a little and used a melt-and-pour soap base that I found at Michaels. And, to be honest, these aren’t the purest soap as they still have ingredients in them that aren’t ideal. But since this was my first foray into soap making, I figured I’d start with the easiest way possible and delve in deeper from there depending on how my first soaps turned out. So far, I am really pleased with them and can’t wait to do more! But for now, here’s a simple tutorial for how to make the two kinds of soap that I made: Citrus Poppyseed Exfoliating Soap and Almond Oatmeal Soap!

First, gather your supplies! I bought a 2 pound block of goat’s milk soap base at Michaels. I also found a set of three plastic soap molds. For the Citrus Poppyseed soap, I used three of my favorite essential oils: Lemon, Lime, and Wild Orange, and about 2 tablespoons of poppyseed. For the Almond Oatmeal soap, I used almond extract, coconut extract, and rolled oats.

The process is the same for both soaps. First, cut your soap base into one ounce cubes. I used 10 ounces of soap base which made three bars of each type of soap (to make things easier, I made the Citrus Poppyseed soap first, cleaned all my equipment, and then made the Almond Oatmeal soap).

Once your base is cubed, put the cubes in a glass measuring cup and microwave the cubes according to the instructions on the soap base package. Once the soap in melted, I let it cool very slightly and then I added my ingredients. For the Citrus Poppyseed soap, I added 6-8 drops of each essential oil and then the poppyseed. For the Almond Oatmeal soap, I poured a dash of each of the extracts and stirred until I was pleased with the way it smelled, then I added about a third of a cup of rolled oats and mixed it in.

Once your soap and ingredients are mixed to your liking, pour the mixture into your soap molds (for the Almond Oatmeal soap, I added a small handful of rolled oats to the top of the soap once they were poured into the molds) and place the molds in the refrigerator for about 30 minutes. Once they’ve hardened, pop them out of the molds and you’re done! Admire your handmade soaps!

These soaps turned out so beautifully and they smell amazing. They are a pleasure to use in the bath or shower or to keep in a pretty soap tray by the sink.

Or you can wrap them up with some parchment paper and twine and present it as a beautiful gift! Whatever you decide to do with them, once your try making your own soap, you’ll want to make more. It’s so much cheaper than buying the pretty expensive soaps but just as luxurious!

Make Your Own Laundry Detergent

These little weirdos are always willing to partici

Thanks for another fun Halloween season, Mr. Bones

One of my projects over the pandemic lockdown was

This error message is only visible to WordPress admins
We use cookies to ensure that we give you the best experience on our website. If you continue to use this site we will assume that you are happy with it.OkPrivacy policy