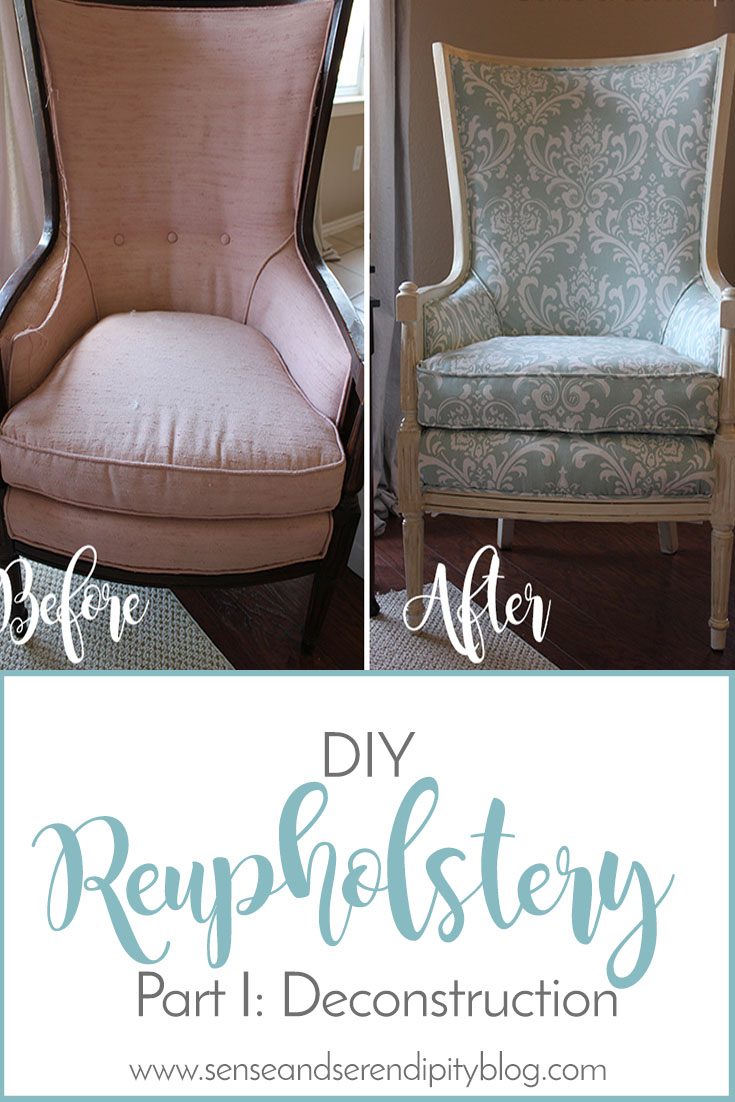 Remember that one time where I came home with a $35 thrift store pink chair that my husband abhorred? Remember how I told him that it wouldn’t be pink forever because I was going to reupholster it?

Well, what I failed to mention to him is that I had no idea how to reupholster a chair. Never done it before in my life. Closest I’ve come to re-doing a piece of furniture is when I made a slipcover that turned out pretty bad. But the only way he was going to let me keep my beloved (although atrociously pink) chair was if I followed through on my lie  claim of being able to reupholster something.

So I googled my little heart out looking for tutorials. And I bought a book. And I researched fabric and supplies. And then I bought said fabric and supplies. And then two weekends ago Lobster went out of town for the entire weekend on a business retreat and I knew it was my chance to tackle the Great Reupholstery Project of 2011. His being out of town gave me the freedom to cuss and scream and turn the living room into a craft room while watching all seven Harry Potter movies and drinking several bottles of wine and not have to ‘splain nothin’ to nobody.

And I’m glad he wasn’t there to witness what I became during this project. I didn’t shower. I hardly ate. I drank far too much. And I had several fights with the Chair, the pink fabric, old rusty staples and a pair of pliers. I may need a tetanus shot. It wasn’t pretty. But, in the end, I DID IT! And I’m going to show you my process in three parts: Deconstruction, Rebirth and Reveal.

So without further ado, here is Part 1 of how I reinvented The Pink Chair:

IMPORTANT NOTE: I took pictures of (almost) every step so that I could use them as a guide when I put everything back together. This process is far too complicated to just wing it! Also, I was VERY careful to preserve every piece that I took off so that I could use it as a pattern when cutting my new fabric.

I started out by flipping the chair face down and removing the black fabric covering the bottom of the chair. I started using the staple remover thingy but quickly found that a flat head screwdriver was a bit easier to use when prying the staples out. I would pull up the staples with the screwdriver about halfway and then yank them the rest of the way out with the needle nose pliers. I kept a little trash can next to me because there are a TON of staples and I knew if they ended up on the floor, my vacuum-cleaner dog would eat them.

The black fabric was a bit fragile so I ended up poking a few holes in it. Eventually, I just tore the rest of it off the chair and decided to wing that part since it wouldn’t be seen by anyone anyway. After I got the damn black fabric off, I repeated the staple pull, tug, trash process on the fabric attached to the bottom of the chair.

Once the bottom was staple-free, I flipped the chair back in its rightful position and began taking the cording (or welting) off from around the finished edges of the chair. I just yanked until it came free. Very technical procedure. Anyhoo, I saved the lengths of cording and labeled them according to where they came from (“front” or “back”) because I was going to take the pink fabric off the cording and re-use it.

Then I repeated the staple pull, tug, trash on the pink fabric on the front of the chair. The entire staple-pulling process took the most time out of the whole project. I swear there were at least 10,000 staples in that freakin’ chair.

Anyway, once I got all the pink fabric staple-free, I carefully removed the fabric from the chair, preserving the batting underneath it as much as possible. The batting looked to be in pretty good shape (and frankly, I had no idea where to buy more cotton batting) so I carefully removed the batting from the chair, keeping it in its form, and set it aside in another room that was closed off from curious and trouble-making cats.

Once that was done, I was surpised to see that I was not the first person to reupholster this chair! Do you see all the batting stuffed into tufts in the original foam? I left those in there because I wanted to keep the chair un-tufted. I also found a piece of the original fabric. It was a lovely mustard yellow. Lobster would have loved that color even more than the pink. Ewww.

SO. I decided to also keep the original foam (again, no idea where to buy it and didn’t find it necessary to replace it) but I determined that it would stay on the frame of the chair while I painted the wood. First, because I’m lazy. Second, because even if I got paint on the foam, who would ever see it? Are you with me? I may be a perfectionist, but I ain’t crazy.

I took my naked chair outside and gave it a good sanding with a fine-grit sandblock. I didn’t sand to take the finish off, I just wanted to rough up the wood a bit to help with paint stickage (I just made up that word). After sanding, I wiped down the wood with a clean cloth, making sure to get in all the cracks and crevices. Then I went inside to drip dry because it was a hundred and freaking eighty degrees outside at 5:00 in the afternoon.

So, there you have it. A chair deconstructed. Stay tuned for Part 2: Rebirth and Part 3: Reveal.

These little weirdos are always willing to partici

Thanks for another fun Halloween season, Mr. Bones

One of my projects over the pandemic lockdown was

This error message is only visible to WordPress admins
We use cookies to ensure that we give you the best experience on our website. If you continue to use this site we will assume that you are happy with it.OkPrivacy policy